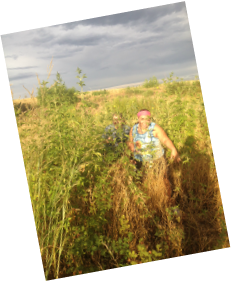 A relatively straight forward trail.  Out illustrious hare had grand plans to lead the hounds through the commerce-ridden halls of the the Town West Mall, but alas, a douche-bag security guard on a Segway served to crush BOY Anus' dreams. Instead, the trail when through Dillards, on a separate side of the mall, and then diverted to the big ditch where the hounds enjoyed their first BN just south of Maple.  the second BN was located on abandoned railroad tracks right underneath the cloverleaf interchange at I-235 and Kellogg.  After that, the trail continued towards West St., where the hounds turned towards the north and ended up back at the Oasis... and there was much rejoicing. 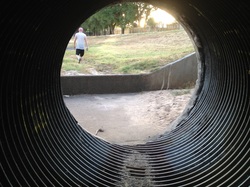 sHiggy: Level: 3 (Will be nice on my first trail back to set)http://savh3.com/Savannah_H3_Shiggy_Meter.htm
Distance: 2.62 miles
Bring:Dry bags (No worries - unless it rains before then - won't even be knee deep) and a sense of humor.
Trail: A-B
On-After: TBD
Hounds?  BOY Anus, ADHD, Ass, Dip, NBA, Weiner, BP, Whoreny boobs, BDT, Puff

This was one for the books!  Where to Start!  This is the BOY Anus version of the hash, which might be a bit different from the what the other nine hounds have to say:

The hash started in the woods of Pawnee Prairie Park and almost immediately went across the creek, through chest-deep water.  BOYA and ADHD crossed the creek without hesitation, but the rest of the pack balked and started looking concerned.  After BOYA and ADHD were specifically told by various other hounds that they were not going to cross, they went on.  After about a mile of running through deer trails and creek beds, the two FRBs met up with Ass at the first BN, which was positioned at the entrance of a culvert, placed next to a couple of flashlights.  After sitting down and drinking two beers, yelling, and whistling, ASS, BOYA, and ADHD came to the conclusion that the rest of the hounds never did cross the creek, so they took both flashlights and entered the tunnel.  Upon exiting, they came upon another culvert, which was much longer and much darker.  After finally making it out of that one, they followed an old railroad trail to Tequila Tony's house where there was plenty of beer waiting for them, but no other hashers.  After an hour of phone calls, GPSing, and searching, all hounds eventually made it to the ONIN well after sundown.


The above fiction is another example of how perception differs in diseased minds.  Yes, three of the hounds took a few moments deciding whether or not to swim across the malaria-infused creek, but Dip, BP, and NBA took the plunge.  The others found more sensible ways to find trail.  (If following trail had been absolutely necessary, ASS wouldn't have been one of the FRBs.)  When this group of seven intrepid hounds found the first BN, we discovered most of the beer had been consumed, but the three racists considerately left us the water.  We continued to follow trail to the other side of the first culvert (after almost being attacked by a 50 pound angry snapping turtle).  Going a few yards we found another culvert with a true trail pointing into the looooooonnnng, black tunnel.  (This tunnel had a large guard-algae-creature in front of it, btw.)  Turns out the FRBs decided the rest of the hounds were not capable of eventually finding trail, so the three of them took the TWO flashlights left by the hare to illuminate their way through the half-mile black tunnel.  When the DFLs got to this point, no one was willing to feel their way through this seemingly endless BLACK tunnel, since the DFLs all enjoy living and did not want their filthy turtle-gnawed bodies found by the cadaver dogs three weeks later.

The DFLs continued above ground attempting to find trail, assuming that the culvert would eventually end.  We continued on for about a mile into the woods.  The sun was fading, and we were all eyeing each other wondering which one would taste the best in case we got stranded like the Donner Party.  We attempted to use the GPS but evidently even the satellites decided we were too lost.  We were thinking fondly of our respective loved ones whom we may never set eyes on again.  We then retraced our steps, and found a low fence (after BP desperately attempted to climb a chain-link fence, getting hideously cut up in the process).  At this point, we found the other end of the culvert, made several hysterical phone calls to the FRBs who were making a half-assed attempt to find us, and made our grumbling way to Maize Road.  As we stumbled with fatigue down the road, we eventually found ASS who picked us up in his car.  So 7 nasty, dirty, stinky, cranky hounds crammed into ASS's clown car (do not ask what went on in the back seat - let's just say that Puff finally paid Dip back for all the deadbugs).  We eventually arrived at Tequila Tony's for the on-in.  We finally were allowed the golden elixir of life and then commenced with the accusations.

And as a post-script, despite the drought and hideous heat we've been experiencing, the poison ivy was plentiful and very healthy, unlike the nasty creek we were led down most of the way.  Tequila Tony claims this was a Level 3 in difficulty; however, I beg to differ.  It was a 5 in my book. 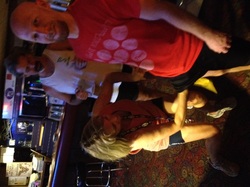 GOYFAW took us to a relatively unused portion of the city tonight.  We started at the Port of Wichita on Harry and Webb, wondered around some neighborhood streets, ending up with a BN at PP Licker's abode.  After the BN, there were approximately 35 T/E splits, ultimately leading the over-achievers to busy park, where the hare, for some reason, expected them to utilize the exercise equipment.  Everyone ended up, of course, at the ONIN, where we had a truncated circle and actually wound up naming nnAustin, who will now and forever more be known as "ADHD".  Of course, there is an acronym involved, ask someone about it!  On-After was back at PP Licker's place, where NBA, ADHD, and BOYA had a couple more beers.
What? Tornado Alley GOYFAT - Hash #1120
When? Tuesday, July 24th, 6:30 pm
Where? Skyline Park
Hare? Dip
Hash Cash - $5
Hounds:  NBA, Shit, ASS, Puff, Bloody Dyke Turner, Whore Knee Boobs, nnAustin, Beeestie, Tequila Tony, nnHannah, nnGunner, PPL, (and BP at Mort's for on-after)

The weather outside was frightful (you know the rest), but the gallant hare and hounds managed to endure another one of Dip's epic-ally shitty trails.  (The hounds are considering taking up a collection to purchase some chalk for Dip that is actually visible to the naked eye.)  Beer Near was in a decidedly seedy neighborhood bar that no one knew existed.  The miracle was that Shit and ASS actually stepped inside this gaily adorned establishment and partook of the golden nectar of the gods.  Trail continued on an interminable amount of time (keep in mind the temp was around 120 in the shade).  We ended up back at Skyline Park (another spot no one knew existed), and Dip treated us to hot dogs and chips (two of the major food groups), and shitty beer.  Circle celebrated analversaries, birthdays, backsliders, and we were treated to one of Puff's numerous dead bugs (what a surprise).  On After was at Mort's, with BP waiting for us with cheap martinis.  On on.

Much like General Sherman in Georgia, BP blazed a debauch-ridden trail through the Confederate side of Wichita.  Trail started at Seneca St. Bar and Grill, where domestic drafts were only $1 (thank you new Happy Hour law)!  The hounds then followed trail in 106° heat to the friendly confines of South High, where the first BN was located inside of an outhouse.

The second BN, however, was only located by nnAustin and BOYA, who both waited patiently, with five glasses of beer, for the other three hounds that never showed up.  The locals seemed to appreciate the free rounds that were left, however, as neither one of those two light-weights were willing to finish the pitcher they bought for everyone.

Hashers circled up at BP's abode with Pizza and more beer.  Down Downs for the losers that missed the BN, as well as the wankers that had the audacity to give beer back to the bar.  A clean version of "Happy Birthday" was sung to BP's daughter, nnDakota, for turning six.
What? GOYFAT - Hash #1118
When? Tuesday, July 10th, 6:30
Where? Merle's
Hare? Born On Your Anus
In attendance: BOYA, NBA, Dip, Puff, Ass, TLC, KFC, Tequila Tony, PeePee,  nnAustin, nnGunner


Met for a shorter trail at Merles.  A former TAH3 Hasher, Tequila Tony, just moved back to town and joined us.  Trail left Merle's and headed north towards Riverside.  It turned at the Indian Center and headed towards the Art Museum, then followed the Little River around to the Tennis Complex, where a BN awaited.  After the BN, trail headed towards the Keeper, which contained a T/E split.  We had a couple of hashers recovering from surgeries, so the Turkey trail went straight back to Merle's while the Eagle went on to Douglas, through Delano, and back to Merle's.


Inside, we toasted Kari, our favorite bartender, as she is leaving to find something else to do.  She seemed appreciative, and Tequila Tony regaled our circle with some new hymns that we were not familiar with.  The night ended with On After-After at the Shamrock with BOYA, PeePee, NBA, and Tequila Tony... a very epic night indeed!

What? Tornado Alley Hash #1117
When? Saturday, July 7th, 2012 @2:00 pm
Where? Dillons parking lot at the corner of Maize and Central.
Who? Apparently a shit-ton of KCH3 hashers, 20 the last I heard! Hopefully a solid number of TAH3, YBRH3, and 2MoonH3 as well. So we can attempt to gauge how much beer is needed, please do your best to RSVP!
Hare? Born on Your Anus

This one was dubbed the "KC Invasion" hash.  A significant portion of hashers form KCH3 and 2MoonH3 came down to r*n a trail that will, in time, only be described as "legendary".  Despite 104+ temperatures, about 35 hashers descended on the streets and trails of NW Wichita.  The trail started in the Dillon's parking lot and immediately went into Swanson park.  There was a SC option, but some evil FRB decided to mark it as a false trail, forcing everyone else to go the long way!  There was plenty of cold beer and water at the edge of the park for the first BN, so hashers could get lubed up a little more before they hopped the barbed wire fence head through a little private property, exclusive neighborhoods, and 5' to 6' prairie, which concealed a good amount of Poison Ivy that was undoubtedly trampled through.  After leaving the Deer Trail neighborhood, there was a T/E split, which directed the Turkeys straight down 119th to the Autumn Ridge neighborhood, while the Eagles put in an extra mile, mostly in the sun, to catch the second BN, which also contained jello shots!  The T/E trails converged in Extenze's sister's neighborhood, where we all experienced a significant dose of hospitality, as she provided our stinky asses with a pool, food, beverages, and all-around good times!

A huge thinks to her and the out of town hashers that made this such an epic Saturday!  ONON!